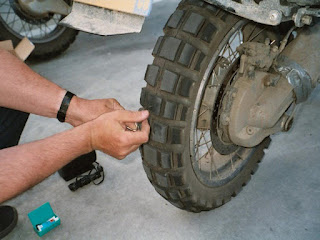 Rodney and I had been visiting in the village of Ndatu for a few hours yesterday and were just planning on jumping on his motorcycle and riding for home. As we were walking towards our bike, a new friend named Baba Elia noticed that our rear tire was flat. We had planned on being home within the next few minutes, but that all changed with this news. Thankfully, we had parked not 30 feet from a small Duka (shop) that specialized in motorcycle parts for the numerous motorcycles that ferry villagers up and down Mt. Meru to and from the local market. As we settled on the slab of wood for a bench outside the duka, we were able to engage several people in conversation. One particular older gentleman named James spent about 30-40 minutes conversing with me in my unrefined Swahili. Of all the practice I did that day, this unexpected delay turned out to be some of the most valuable of all. Although it was getting dark by the time we arrived home, it was exciting to see God's blessing in the interruptions of our lives.

Thank you for your prayers for us. Please pray for me as I venture to preach some of this Sunday's message in Swahili.
Posted by Shipes to the Datooga at 6:27 AM No comments: 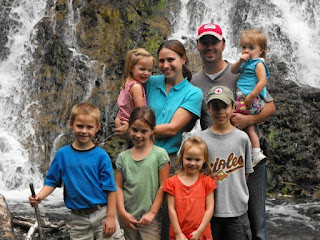 First I must apologize for not adding to this sooner. I would give a bunch of excuses about how busy things have been here since we moved, but that really is no excuse. Many of you have been very busy as well, but yet you have prayed earnestly for us. I know this because the first two months in country have doubtlessly been full of challenges, but in spite of them things have gone exceptionally well. After spending a few weeks setting up our home here in the midst of severe power outages, we had several weeks of language school. We were anticipating being placed in the beginner Swahili course, but because of some study in Swahili while still in the States, we were able to skip the beginner course and move directly into intermediate. Not only were we able to learn at a much more rapid pace, but it also enabled us to save several thousand dollars of tuition fees. We have also had the privilege of learning from a number of veteran African missionaries about various cultural challenges and differences with African ministry.

Starting this week, now that language school is over for the time being, I will be joining with Rodney Myers as we focus on evangelism in one village in particular. Please pray for several items as we labor to plant a church in the village of Ndotu. First is a man named Stefano. Rodney has begun discipleship with this man already, but his work schedule has recently kept him away from Ndotu for almost 2 months. Second, is a man named Edgar and his fiance Verdiana. They both, after several weeks of Bible study, recognized that they were on the wide road that leads to destruction, repented of their sins, and trusted in Christ for salvation. Please pray for them that they would obey the commands of the Lord with regards to marriage. Third, please pray that the Lord would prepare the hearts of many in that village to receive the Gospel of Christ. This leads me to my last request. We have recently felt the great frustration of having a wonderful message to tell, but minimal ability to share it. Would you pray with us that we would quickly be able to grasp the language of Swahili and be able to communicate this life saving treasure to those who are lost.

On the family front, the kids are adjusting well to life here in TZ. They have made a number of friends and seem to be increasing in their Swahili every day. Thankfully we have not had to deal with any Malaria or other serious illnesses in our time here thus far. The kids have already enjoyed seeing monkeys of every sort, giraffe, zebra, cape buffalo, a black mamba (thankfully killed by our dogs), and some of the most beautiful (and noisy) birds you could imagine. The picture above is taken at Arusha National Park, which is just a few miles down the road from our home. We went on a safari there for Christmas Eve.

Thank you for your prayers

Aaron & Nicole Shipe
Posted by Shipes to the Datooga at 7:52 PM No comments: